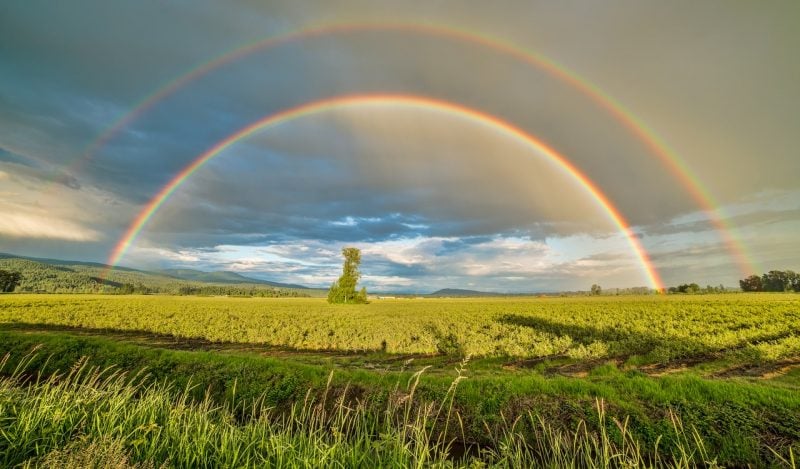 Seeing a rainbow is always a tranquil experience! But have you ever seen a double rainbow? Do you know that double rainbow meaning has a deeper significance?

Rainbows have symbolic meanings and hold new promises for us. So relax and keep reading as we will now interpret the meanings attached to rainbows!

What Does a Double Rainbow Mean?

A double rainbow is said to denote transformation! The primary rainbow represents the material world and the secondary rainbow, the spiritual world.

Therefore, a double rainbow indicates a spiritual transformation for the onlooker. Seeing double rainbows is considered to be promising as they signify new beginnings and good changes!

Double rainbows can be seen when the sun’s rays are twice reflected within a raindrop. In the rainbow body, the colors get inverted – the red color appears on the inside while the violet is on the outside.

This is because the violet light reaches the eye from a higher raindrop while the red light comes from the lower ones.

A rainbow is said to be a connection to the spiritual world. The rainbow is considered to be a link between heaven and earth. It symbolizes a new beginning and a big transformation.

It is said that rainbows hold a message from God or the spirit guides. If you see a double rainbow, consider it as a good omen. The appearance of a rainbow in times of crisis can be a spiritual sign. It can be that the spirit guides are asking you to take a leap of faith and take a break from your current path. It is interpreted as a sign to start afresh.

In certain cultures, rainbows are considered as angelic signs that answer your spiritual questions.

It is also said that the rainbow symbol indicates hope or a promise to good fortune.

Double rainbows can be a sign of inner spiritual awakening. It could denote that the spiritual realm will now open its door to you!

5. Comfort for the dead

When rainbows appear during funerals it signifies that the deceased has reached heaven and is sending the rainbow as a message to their loved ones!

References in the Bible for Double Rainbow Symbolism

Double rainbow meaning symbolism is observed in the biblical books. It has been referred to in the books of Genesis, Exodus, Ezekiel, and Revelation. A double rainbow as a sign is cited in the Bible to justify that ultimately all the worldly things are His glory and not our own.

Therefore, we must have faith in Him and find our truest purpose. By living in our true Soul path we will be able to fulfill the task that had been entrusted to us by the Almighty.

Rainbow and The Story of Noah’s Ark

In the Bible, there is a story of the great flood. It rained for 40 days and nights, continuously flooding the entire earth. Noah built an Ark in which along with his family he took pairs of every kind of animal. When the flood was over and the land dried up they all emerged from the Ark. And then Noah saw the mesmerizing rainbow with a promise from God.

It was a promise to mankind that He would never flood our world again. So, it is a Christian belief that rainbows exist as an assurance to us from the Almighty.

Buddhist Teachings and The Rainbow Body of Ascension

In Buddhist philosophy, it is said when a human has progressed in his spiritual journey, the frequency of his body raises. Eventually, with more spiritual advancement, he attends a state where his physical body transcends into a rainbow body!

This can happen in a deep advanced spiritual transformation process and the individual is believed to take the shape or form they desire! Lord Buddha is said to have achieved the rainbow body of ascension.

“They say one man’s trash is another girl’s treasure

So if it’s up to me, I’m gonna keep you forever

‘Cause I understand you

And wherever you go, so will I

‘Cause a double rainbow is hard to find”

Like this “Double rainbow” song by Katy Perry, there is a native American saying that if you see a double rainbow you are about to find your Soulmate sooner! In the quest of love, this rare rainbow acts as a sign that you are on your way to meet your one true love.

Rainbows have unique meanings and myths related to the different cultures of the world! A cultural rainbow may not give an accurate explanation as to why a rainbow forms but will signify a subtle meaning associated with the tribe or common people.

Here are some cultural definitions of double rainbow meanings.

• The Irish Pot of Gold

There is old mythology saying that there exists a pot of gold at the end of rainbows!

According to Norse mythology, there is a rainbow bridge that connects Midgard (our Earth) to Asgard (the realm of the Nordic Gods). It is the bridge through which the Gods travel to our realm. It is said that the warriors of the Earth will finally join the Gods in the apocalypse.

In Feng Shui, rainbows do have a lot of significance. According to Feng Shui rainbows symbolizes good fortune and new opportunities.

In eastern cultures, it is warned to point at rainbows as that will bring you bad luck!

A rainbow is a beautiful natural phenomenon. Its seven colors – violet, indigo, green, blue, red, orange, and yellow have spiritual significance for chakras, auras, and orbs. The aura colors have specific spiritual explanations.

What Does It Mean When You See A Double Rainbow?

1. It can symbolize growth and new beginnings.

2. A double rainbow is often thought of as an indicator of good luck and prosperity. Therefore, if you see a double rainbow you can assume that abundance and fortune are on your way!

3. The double rainbow signifies a path to success and the greater good.

4. It is said that when you see a double rainbow, it is a message from the Universe that your efforts have been recognized and blessings are on your way.

5. This is also a symbolic representation of spiritual transformation. It is believed that double rainbows are signs that you are now about to have an internal awakening!

6. It tells you to be true to yourself, to believe in your inner power, and trust in your intuition.

7. A double rainbow signifies that miraculous magic is on your way!

Double rainbows are not just a lovely natural phenomenon, these are often said to have a symbolic meaning. Depending on various cultures the interpretations may differ! While you might not believe in the pots of gold at the end of rainbows, but it could be just an indication of huge opportunities on your way! In general, even a single rainbow is believed to bring good luck. Double rainbows are considered as a symbol of transformation to the observer.

Whether you believe in the cultural meanings if you catch a glimpse of a double rainbow do give your full attention. If not anything it will just lift your mood and make even an ordinary day seemingly wonderful!